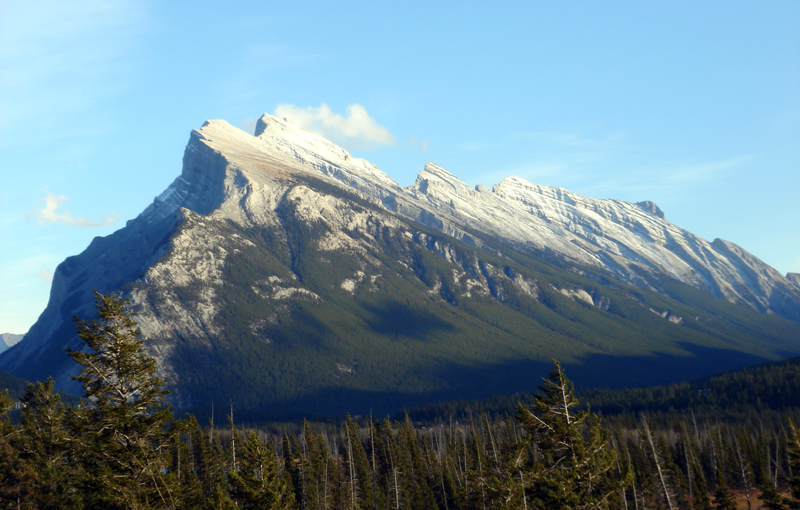 All day climb. (Don, Dana, and Jeff) We carried a tent and warm clothing for the predicted cold, but were blessed with blue skies and brilliant sun. Half-way up the mountain our canteens ran dry, so we drank water from melting ice and snow.

Just above the treeline, we crossed paths with two climbers in their twenties. They were surprised to see two young boys (ten and eleven) at that altitude. Near 7000 feet, we surpassed the height of Mount Norquay which faced us to our north. By mid-day, we had reached the summit and signed the alpine-club journal we found tucked into a small cairn made of shale. My dad proudly recorded our names, his two sons being the youngest entries at the time. Before our descent, we took a few minutes to peer down from the overhanging ledge which provided a breathtaking straight drop view. Nearly two miles below us was the Bow River, glistening aquamarine in the afternoon sun.

During our descent, I stumbled in the loose rock that covered the upper mountain. Thanks to the earlier advice of my dad, I narrowly escaped death by stopping my head-over-heals tumble. Little more than a yard or so separated me from a few thousand foot drop. I was badly shaken with a few cuts and bruises but happy to be alive. We arrived safely back at the base of Mount Rundle as night fell on the town of Banff. 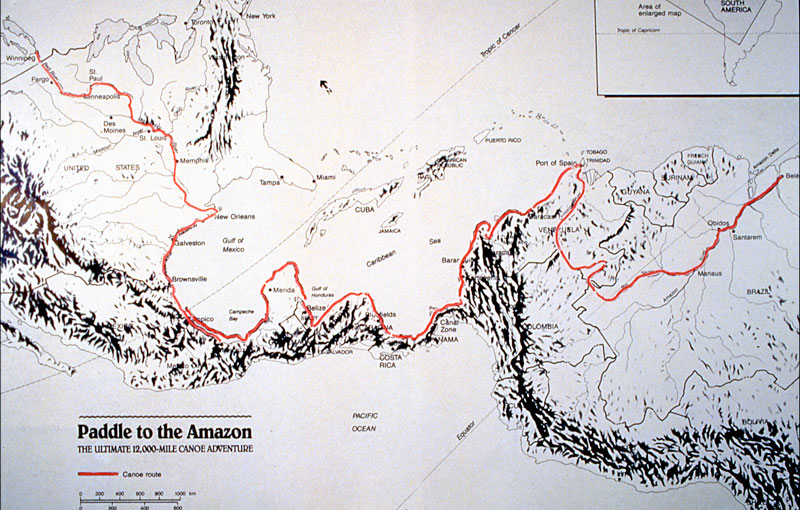 I was nine years old when my father first mentioned the idea of paddling from Winnipeg to the mouth of the Amazon River in South America. A keen interest in nature, adventure, and a two-year hiatus from Canadian winters prompted my enthusiastic response and desire to go. This was all it took for my father to set a departure date and begin planning. Ten years later, we set out to paddle six thousand miles of rivers and six thousand miles of ocean coastline to reach Belem, Brazil – our final destination at the mouth of the Amazon River.

Paddle to the Amazon
Watch The Film Now 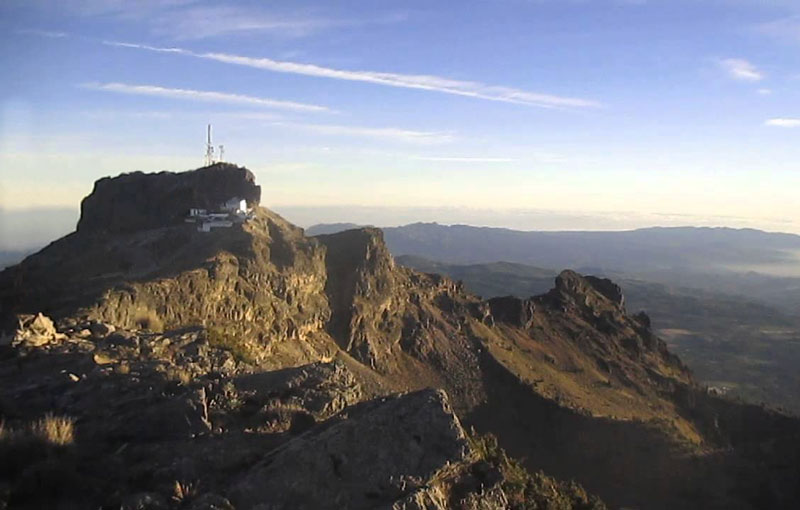 During our Amazon trip, the winter storms on the Gulf of Mexico forced us to hold up in Veracruz. While staying there, our new friend Gabriel Delgado told us about an inactive volcano he had once climbed. At nearly a mile higher than Rundle it sounded like a fun challenge.

With minimal preparation we set out for the town of Xalapa with Gabby and his friend Juan Osorio from Columbia. We made it half-way up the east side of the mountain on our first day, but without a tent, spent the night standing in the freezing rain like statues on Easter Island. At the end of our second day, we arrived at a small village where the natives made charcoal and grew potatoes. That night, a family treated us to their barn where we covered ourselves with hay and slept comfortably dry and warm. The next morning, we climbed the remaining few thousand feet to the summit. High above the clouds, we took in the beautiful view for a few hours and then began our descent along the winding cobblestone road which lead us back to Xalapa. 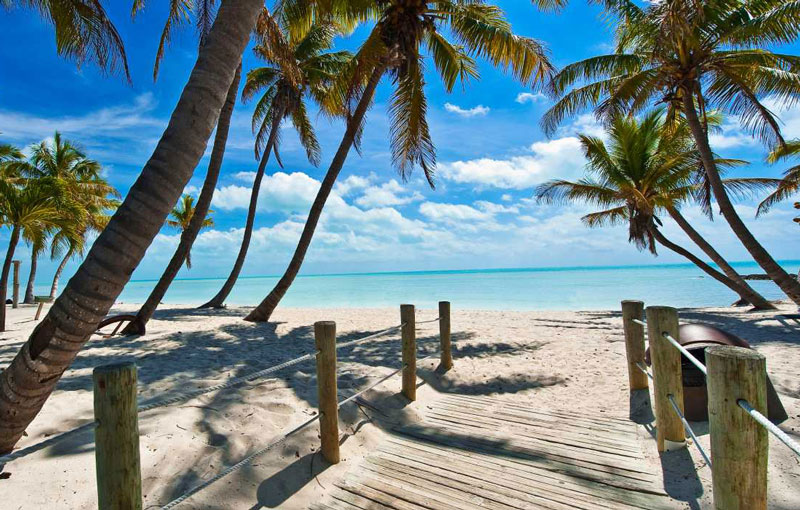 After talking with my dad about a summer adventure, we decided on a canoe trip from Princeton, Iowa to Key West, Florida. Half the distance would be along the Mississippi River and the remaining miles along the Intracoastal Waterway which skirts the Gulf of Mexico. I invited my friend Jason to join us for the trip and in short order he and his good friend Josh were geared up and ready to go. Neither Jason nor Josh had paddled before but they were convinced it was an opportunity they didn’t want to miss.

The Mississippi was in full flood that year and we got an amazing push all the way to the Gulf. Aside from a tropical wave around Tampa Bay and a few torrential thunderstorms we had excellent weather. The mosquitoes and no-see-ums did however eat us alive in the Everglades and were worse than anything my dad and I encountered on our Amazon trip. Upon arriving in Key West, we continued eastward to the outer islands. My dad wanted to continue as far as the Dry Tortugas but by the time we arrived at Boca Grande Key we had experienced enough of the open seas. We paddled back to Key West and hung out there for a few days before returning home. 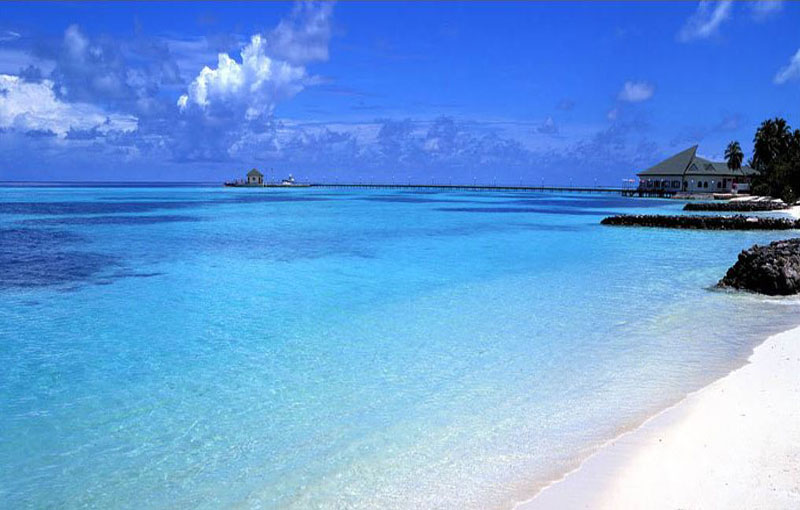 My dad and I decided we wanted to take another canoe trip to Florida, but this time along the east coast. Once again, we followed the Intracoastal Waterway to avoid the open coast as much as possible, but did cross many wide river deltas and open bays. One factor we hadn’t anticipated was the security concerns left behind by the 9-11 attack in New York. Unexpectedly, we were frequently stopped by the coast guard, navy, and military. The officials found two guys in a canoe highly suspicious and worthy of regular inspection. Another issue was locating good places to camp each night as most of the east coast is developed. As always, we met many interesting people along the way and had many remarkable experiences. Before long, we had arrived in Key Largo and called our good friend Holly whom we had met during our previous trip to the Keys. We stayed with her and her boyfriend for two days before heading home.

There is a surreal nature to all of the adventures I shared with my dad, but this second trip to Florida was particularly unusual. The days flew by in a haze that seemed to defy the normal passing of time. It seemed we arrived in the keys not long after we set out from New Jersey harbor. My dad felt the same way about this experience and thought our two Florida journeys would make an interesting book. He encouraged me to publish the journals I kept throughout both trips and I agreed it was a good idea. I gave the project more thought after losing my dad in 2012 and decided to include these two adventures at the end of his autobiography which will be available in the near future. 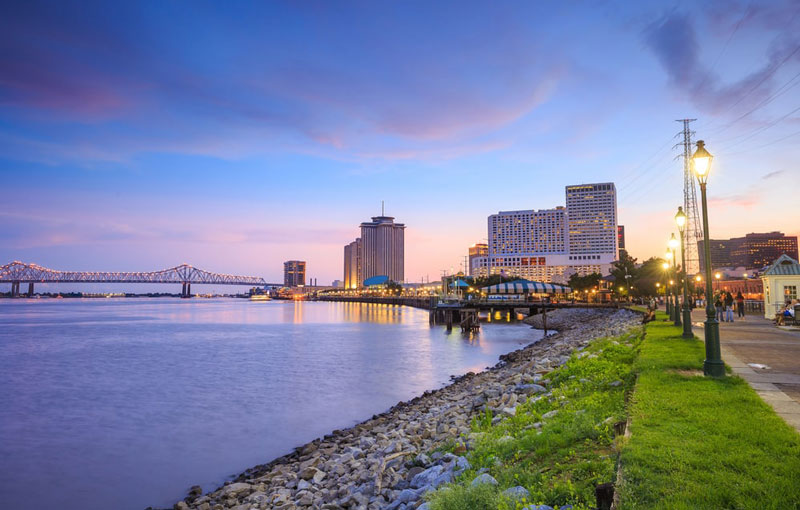 My good friend Gabriel Delgado phoned me in 2016 with the idea of taking a ten-day canoe trip down the Mississippi River. He had just recovered from cancer and was looking for something memorable we could do together to commemorate his return to health. After some initial planning, the trip morphed into a reunion of sorts with friends joining us at various locations along the way.

Josh and Jason, who had paddled with my dad and I in 2001, were up for another round. This time they would be in two canoes with their girlfriends Toni and Elaine. Another friend of theirs, Stan, also wanted to join us in his kayak.

For its final voyage, I resurrected the 20-foot long canoe built by Bill Brigden as a prototype for our Amazon trip. My friend Chris Forde paddled up front and documented the entire trip with virtual surround video. My wife Stacey wanted to see what it was like to be out on the Mississippi so she and my son David were passengers for the first two days and then they returned to the comforts of home.

On our 9th day out we were joined by Stan’s friend Kevin who kayaked with us for two days. Gabby and his son Gabriel Jr. joined us in Vicksburg, and four days later, my best friend Lindsey flew in from Toronto, Canada to join us ten miles north of Baton Rouge. Three days later we arrived in New Orleans and celebrated by hanging out in the French Quarter and enjoying the festivities of the city before heading home. Aside from getting hammered by the tail end of a tropical storm, the weather was picture-perfect for most of the trip.